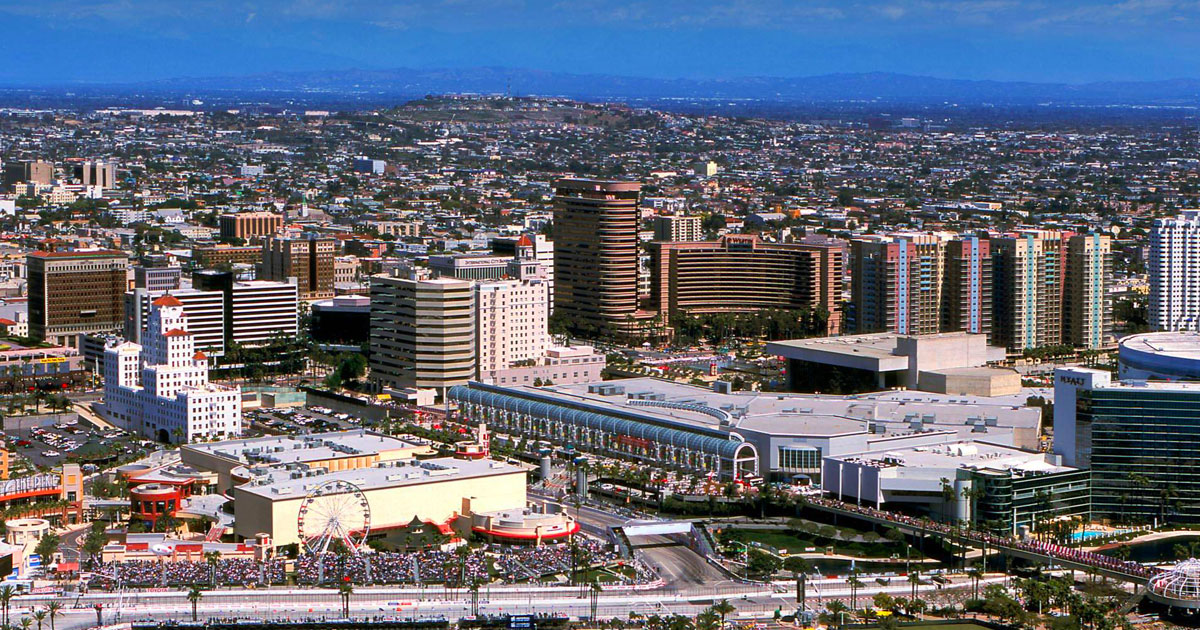 The city of Long Beach, located in the Los Angeles metropolitan area in Southern California, is one of the 10 largest cities in California and 50 largest cities in the country, by population. In the 1920s, Long Beach discovered oil reserves that were among the most productive in the world at the time, which became a cornerstone of the city’s economy.  Over the years, the city has hosted auto and aircraft manufacturing. Ford Motor Company operated a factory there from the 1920s-1960s, and Douglas Aircraft Company located there for World War II production. To support wartime manufacturing in Long Beach and other cities, the federal government created racially segregated public housing developments to support the influx of workers to factories in cities. The government established an agenda of racial segregation using public housing and market regulations to manipulate housing patterns, and today Long Beach and other cities across the county remain highly segregated by race and class.

Today, Long Beach’s economy is centered around its port, which has become one of the busiest in the United States, and the naval base located in the bustling harbor area. Like many places in the country, Long Beach has high levels of income inequality. In 2012, the city’s highest earners had incomes nine times that of those with the lowest incomes, placing it among the top 25 large cities in the country with steep levels of inequality.

The Long Beach Unified School District (LBUSD) is the third largest in California, serving nearly 74,000 students from pre-K to high school at 85 schools located in the cities of Long Beach, Lakewood, Signal Hill, and Catalina Island. Approximately one-fifth of students are English Language Learners and nearly 70% are from socioeconomically disadvantaged backgrounds. LBUSD is the largest employer in Long Beach, and prides itself for collaborating broadly with the community, including partnerships with more than 1,300 local businesses and thousands of Volunteers in Public Schools (VIPS) that assist teachers and students in classrooms. Long Beach schools have received significant praise and accolades for their success and are often upheld as a model for replication. Still, inequities persist in graduation rates and post-secondary attainment that can likely be attributed to broader inequities in social and economic prosperity. Approximately one-third of children of color in Long Beach are living below the poverty line, compared to 9% of White children, and rates of unemployment, working poverty and access to affordable housing and grocery stores differ widely by racial group.

State of Healthy Living and Learning in Long Beach

Long Beach has 52% of the supports for healthy living and learning measured through the Index, which is one of the highest among the 10 cities measured, though this still leaves substantial room for growth in instituting a comprehensive and equitable system of supports. Long Beach had the highest level of Commitment relative to other domains, with reportedly low numbers of pre-school suspension, K-12 expulsion and referrals to law enforcement. Still, there were comparably high rates of suspension for Black students (23% compared to 5% and 8% for White and Latino students, respectively). In Capacity, Long Beach had the highest rate of experienced teachers (98%) compared to others, though relatively low access to AP/IB curricula with only 26% of High School students enrolled in at least one AP or IB course. In terms of living environment, the city demonstrates relatively strong access to healthy food (15% of low income individuals lack access to grocery stores) and some of the lowest levels of school economic segregation overall (50% of students in high poverty schools), though this is still significantly higher than the minimum benchmarks for both indicators. Long Beach, like other communities, needs to address access to and integration of low-income housing, and access to fair salaries so people that are working full-time earn enough to live well above the federal poverty line. Currently, 17% of Latinos working full time do not earn enough to live above 200% of the poverty line, compared to 3% of Whites working full time. Income remains the number one predictor for student academic success because it impacts where families can afford to live and availability of resources and opportunities in their community, so addressing inequity at the community level can bolster academic outcomes in the community.