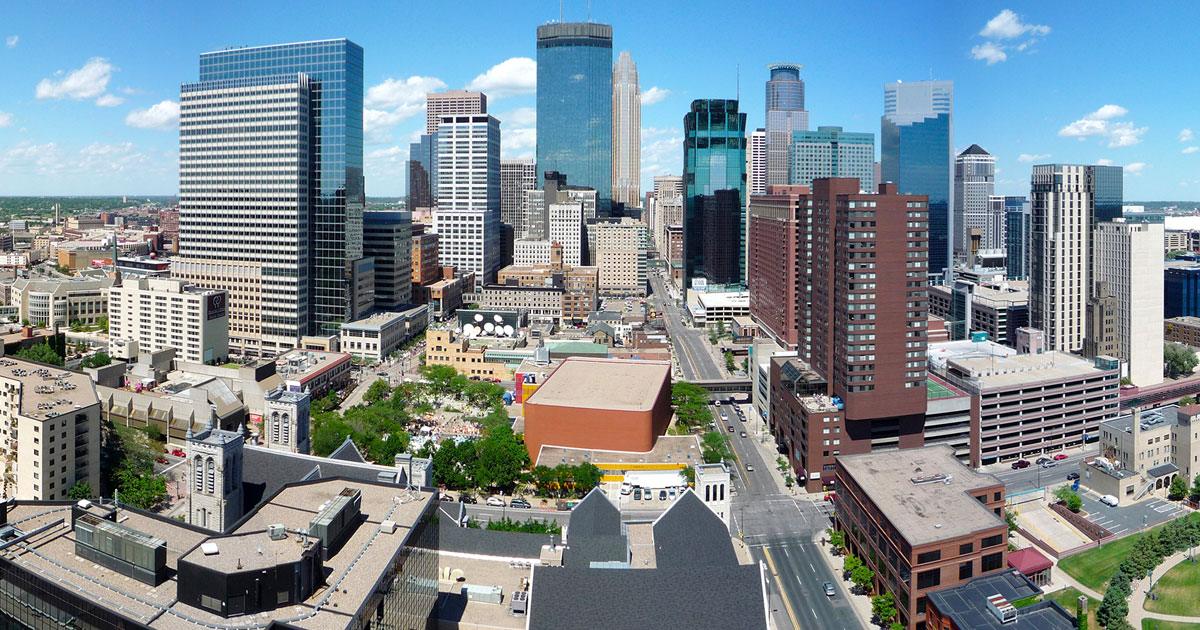 Minneapolis is located on the banks of the Mississippi River in central Minnesota, and together with sister city and state capital St. Paul comprise the “Twin Cities” and 16th largest metropolitan area in the nation. The city was initially incorporated after the discovery of a waterfall at the head of the Mississippi river that led to the birth of the lumber- and milling-related industries that continue to play a major role in the local economy today. Today, the healthcare industry and a burgeoning tech economy also serve as a major source of jobs and economic growth.

Minneapolis has historically played an influential role in the national discourse on racial equity, despite a strong and consistent majority White population over the course of its history, and it is one of the least racially and economically segregated cities relative to the other nine studied. In recent years, leaders of Minneapolis have made great efforts to welcome refugees from Southeast Asia and to prioritize racial equity in planning and development efforts. However, the Twin Cities area (Minneapolis/St. Paul) is also confronting the need to rebuild confidence in the Police Department particularly among communities of color following the July 6, 2016 shooting of Philando Castile by a St. Anthony Police officer (a nearby suburb) during a traffic stop with Castile’s girlfriend and her four-year old daughter in the car. The incident ignited major protest across the Twin Cities area after the dash cam video was released. The police officer was later acquitted which further creates a tense climate between community advocates and police in the Minneapolis area.

As of January 2016, Minneapolis Public Schools operated 74 non-charter schools, including 45 K-8 institutions, seven middle schools, eight high schools, and 14 alternative and special education schools.  Over 35,000 students were enrolled in MPS at the time, 38% of whom were Black, 34% White, 18% Latino, and the remaining 10% Asian and Native American. Black children in Minneapolis are a staggering eight times as likely as White children to be living under the poverty line, and Latinos and Asians are at least five times as likely. Young adults of color in Minneapolis are overrepresented in the population of youth that are not in school or working, including more than one in five Black students and nearly one in five Latino students.

State of Healthy Living and Learning in Minneapolis

Minneapolis has 52% of the supports measured through the Index, which is the highest among the 10 cities measured. Minneapolis shows some of the highest level of supports in Commitment and Stability, with 0% expulsion rates across all racial groups and the lowest level of working poverty (7%) among the 10 cities measured, though rates are considerably higher for Latino full time workers (23%) compared to other racial groups. The greatest gaps in access are in supports related to Capacity. Though Minneapolis has one of the lowest rates of school economic segregation (46% of students attend “high poverty schools” where 75% or more of the students qualify for free or reduced-price lunch), it still is considerably higher than what an ideal target for a loving city would be and there are wide inequities between the rate of White students in high poverty schools compared to other racial groups. Additionally, students are not being enrolled in rigorous coursework, with only 30% of high school students enrolled in one or more one or more AP/IB classes, and wide inequity in enrollment between White and Black and Latino populations (51% of White students enrolled in AP/IB compared to 17% and 19% of Black and Latino students, respectively). While Minneapolis had the highest level of supports related to Stability, gaps in access to affordable housing, livable wages, healthy food and health insurance, particularly for children of color, continue to create gaps in the opportunity for all students to learn and thrive.