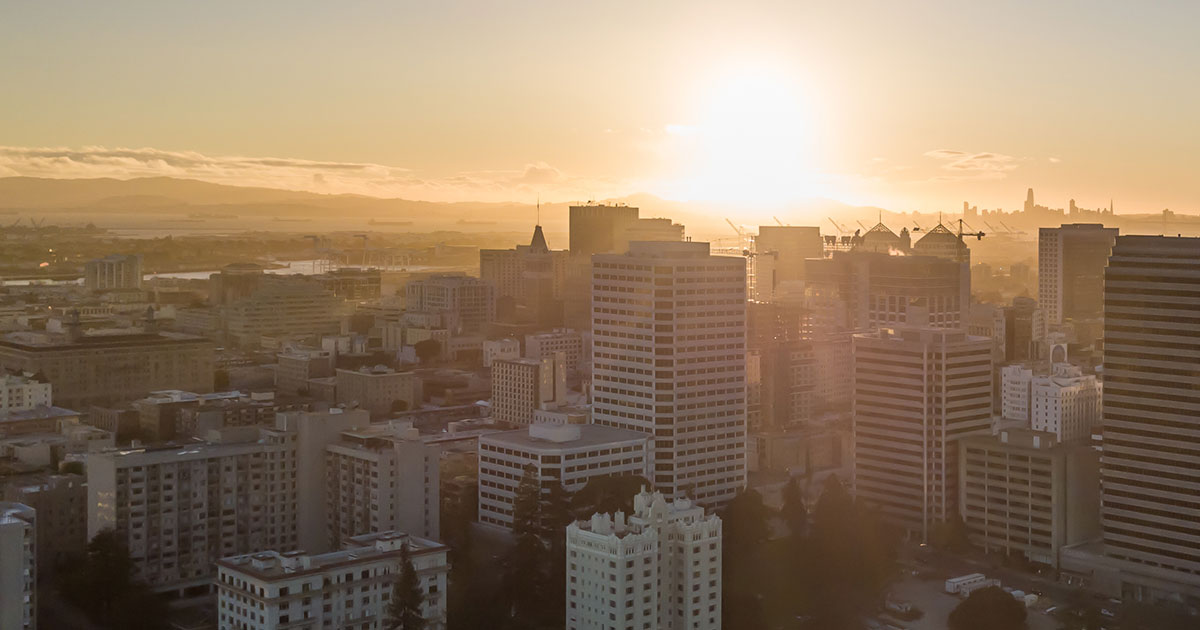 Oakland is a major port city located in California’s San Francisco Bay area. It is the eighth most populous city in the state and the 45th largest in the country. Oakland began as a railroad terminus for the Transcontinental Railroad, and today major industries include transportation, financial services, and health care. The Ohlone lived in Oakland before Spanish explorers and missionaries who arrived in the 1770s. During the Gold Rush, the state enlisted local militias in the mass murder of indigenous people. Enduring these horrific events and more, indigenous groups in the Bay Area now comprise one of the largest communities of intertribal Indians in the county. Oakland played a major role in the Great Migration, a term used to describe the sixty years during which six million Black southerners fled the white terrorism of Jim Crow. The Great Migration began in the early 1900s and continued through 1970. Oakland was a receiving city for Black migrants, particularly those coming from Louisiana and Texas. During the 1940s and 1950s, thousands of African-Americans migrated to Oakland and the Black population grew from 8,500 to 83,000.

Racist policies and practices created deep inequities in cities like Oakland. During the 1930s, the Roosevelt administration created the Home Owners Loan Corporation (HOLC) to lend new mortgages and refinance home mortgages that were at default during the Depression. By 1936 the agency had provided one million new mortgages and the agency owned one in five nationally. The agency developed lending risk maps in over 100 large cities, and map-makers relied on the prejudices of local loan officers, city officials, appraisers and realtors in appraising sections of the city, rating white areas of town as “desirable” and “best” for lending and areas of town where Black people, immigrants, and Jewish people lived as “hazardous,” thereby curtailing lending or issuing loans at much higher interest rates.

Many Black and immigrant families who could not obtain fair mortgages were forced into contract sales, which they paid sometimes double the actual worth of the home, could not build equity, and were more easily subject to eviction. HOLC maps knit segregation into the landscape, and today many of these historic maps align with metro-wide segregation and inequalities in homeownership. (See Oakland’s HOLC map showing the “redlining” of neighborhoods throughout the city.) Restrictive racial covenants were written into Oakland property deeds, which prohibited whites from selling, renting, or leasing in whole or any part to African Americans. For example, the Claremont Improvement Club neighborhood association restricted the neighborhood to those “of pure Caucasian blood.”

School segregation also undoubtedly determined intergenerational opportunity, even in northern cities like Oakland. In 1896 the U.S. Supreme Court upheld racial segregation and for the next 60 years Jim Crow laws legally defined schools, workplaces, buses, railroad cars, and even hospitals and cemeteries as either “white only” or “colored” (Plessy v. Ferguson). In 1954, segregation was challenged in Brown v. Board of Education, and the Supreme Court held that the “separate but equal” violated the Equal Protection Clause of the 14th Amendment. In a unanimous decision, Chief Justice, Earl Warren wrote, “In the field of public education, the doctrine of ‘separate but equal’ has no place. Separate educational facilities are inherently unequal.”

Subsequently, school desegregation plans were initiated in many cities, both in the South as well as in the North, where schools were often racially segregated even without formal segregation laws. Oakland entered into voluntary desegregation orders in 2012 and 2013 but advocates argue more is still needed to address racial, ethnic, and socioeconomic segregation. Today, the percentage of white students in the north part of the district hovers near 90%; in the southern part whites are 10% and Latino and Black students are the majorities. But, it’s not just racial differences within the district; segregated schools are also an inter-district issue. For example, Oakland, which is 90% students of color, is next door to Piedmont City Unified School District, which is 40% white, has more affluent students, and almost $5,000 more in per-pupil revenue compared to Oakland.

Presently, Oakland Unified serves 32,286 in 87 traditional public schools and 34 charter schools. Latino students account for 42% of the student population, Black students 24%, Asian students 13%, and white students 12%. The percentage of English language learners is 32%. The percentage of low-income children in the city is 27%, but in the school district is 74%. Higher percentages of Black and Latino children live in poverty compared to white children and youth of color were more likely to be out of school and unemployed.

State of Healthy Living and Learning in Oakland

Overall, Oakland has some bright spots across several of the domains, and many significant racial gaps that must be addressed for all children to learn and all families to thrive. When it comes to neighborhood stability, Oakland had the highest public transit access of the cities studied, with 76% of residents living near high-frequency transit, and equitable access to transit by race. There are relatively high levels of adults using traditional financial institutions (74%), just above the national average, and voter turnout in the last midterm election was also above average (53%). Still, Oakland, like many cities across the country, faces income inequality and racial gaps in access to affordable housing. Only 59% of Black households, 41% of Latino households, and 66% of Asian households earn enough from their labor to live above subsistence, compared to 90% of white households, Less than half of renters of color in the city have access to housing that is reasonably priced relative to their income. Neighborhood stability is also negatively impacted by the troubling level of youth mortality among Black children.

In schools, Oakland students had less access to gifted and talented and advanced placement classes compared to other cities, and “tracking” of students into those advanced classes based on race is likely leading to much lower representation of Black and Latino students in those advanced courses. Oakland teacher salaries on average are well below the minimum cost of living (74% of cost livable wages), and the teaching force is less experienced than other cities studied (only 75% of teachers have more than 2 years of experience). The policing of Black bodies appears to be prevalent in the culture of the school system, with 15% of Black children receiving at least one in- or out-of-school suspension in the 2015-16 school year. In 2011, Oakland started the Oakland Community Schools initiative, and today operates 25 full-service Community Schools. Community Schools are “public schools that partner with families and community organizations to provide well-rounded educational opportunities and supports for students’ school success.” Well-implemented Community Schools are an evidenced-based approach for supporting student success in academics and beyond.