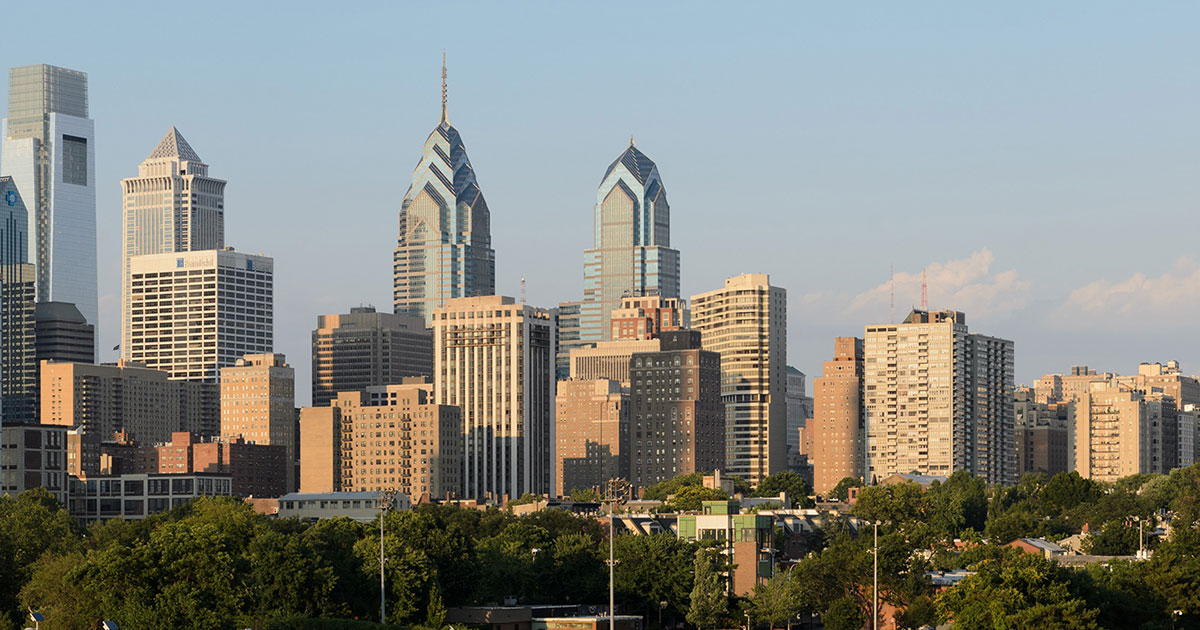 Philadelphia is one of the country’s most historic cities, and is located in the Delaware Valley on the mid-Atlantic coast. As immigration from Europe ballooned, Philadelphia quickly became the leading commercial and cultural center of the American colonies, and like other places, native tribes were killed, enslaved, or otherwise displaced.  By 1765, Philadelphia had a population of 23,000 people, comprising the largest city in north America.

The city’s continued growth was driven by industrialization through the early 20th century and World War I.  “The region’s major industries included textiles, locomotive manufacturing, shipbuilding, iron and steel production, and sugar refining. With the discovery of petroleum, Philadelphia became an oil storage and refining center.”

Between 1880 and 1930, the Black population of Philadelphia grew from 32,000 to 220,000, due in part to the availability of jobs during the two world wars. The housing crisis in Philadelphia and other industrialized cities across the country during this time led to the start of public housing projects that at the time largely spurred development of white-only, single family homes and an agenda of segregation and employment discrimination that continue to impact community segregation and wealth inequity in Philadelphia and across the country. Today, Philadelphia is the most racially segregated of the 10 cities studied, even though socioeconomic segregation is relatively low. In 2015 and 2016 Philadelphia was one of 10 cities the U. S. Department of Justice identified as responsible for a spike in violence. Research shows close connection between segregation and concentrated poverty and community violence, and the prevalence of those two factors in Philadelphia help explain why we also see high levels of violence in communities.

In the 2016-17 school year, the School District of Philadelphia served 130,000 students, of whom half are Black youth, 20% are Latino, 14% are White, and 15% nearly evenly split between Asians and youth of multiple races.  These students attend 251 facilities, including 151 elementary schools, 16 middle schools, 57 high schools, and 27 alternative schools. 86% of students in Philadelphia’s public school system come from economically disadvantaged backgrounds, and young Black and Latino Philadelphians are more than twice as likely to be living in poverty as White children. Disparities in health further highlight the racial disparities in healthy lifestyles.  Rates of infant mortality in Philadelphia are more than 2.5 times as high for Black youth (11.7) as they are for Whites (4.3). Likewise, youth mortality rates for Black (37.8) and Latino (36) youths are more than twice that of Whites (17.2) and more than 1.5 times that of Asians (23.6).

State of Healthy Living and Learning in Philadelphia

Philadelphia has 36% of the supports measured through the Index, which is below average for the 10 cities measured. In terms of healthy living environments, the number of renters experiencing housing cost burden is among the highest (57% of renters pay more than 30 percent of household income on housing), and there are relatively high rates of full-time workers earning under 200% of the federal poverty level among Latino and Asian people, and to a lesser degree Black people, compared to White  people. Along with other cities, Philadelphia has public transportation infrastructure, with nearly 100% geographic access for residents across racial groups. Level of supports for Capacity are among the lowest in the group of 10 cities studied. In particular, none of the K-8 public schools offer gifted curriculum, and only 81% of students attend a school offering at least one AP/IB class. These contribute to one of the lowest levels of participation in AP/IB coursework, with only 19% of students enrolled in at least one AP/IB class. While teacher salaries on average are the second lowest ($29,400 once adjusted for cost of living), Philadelphia has one of the highest rates of experienced teachers (95% with 2+ years teaching experience). Philadelphia also has one of the highest levels of students in high poverty schools (72%) – with 81% of Black and 84% of Latino students in high poverty schools compared to 35% of White students. In two places, Philadelphia did not receive points because the data were not available (including expulsion rates and voter participation).