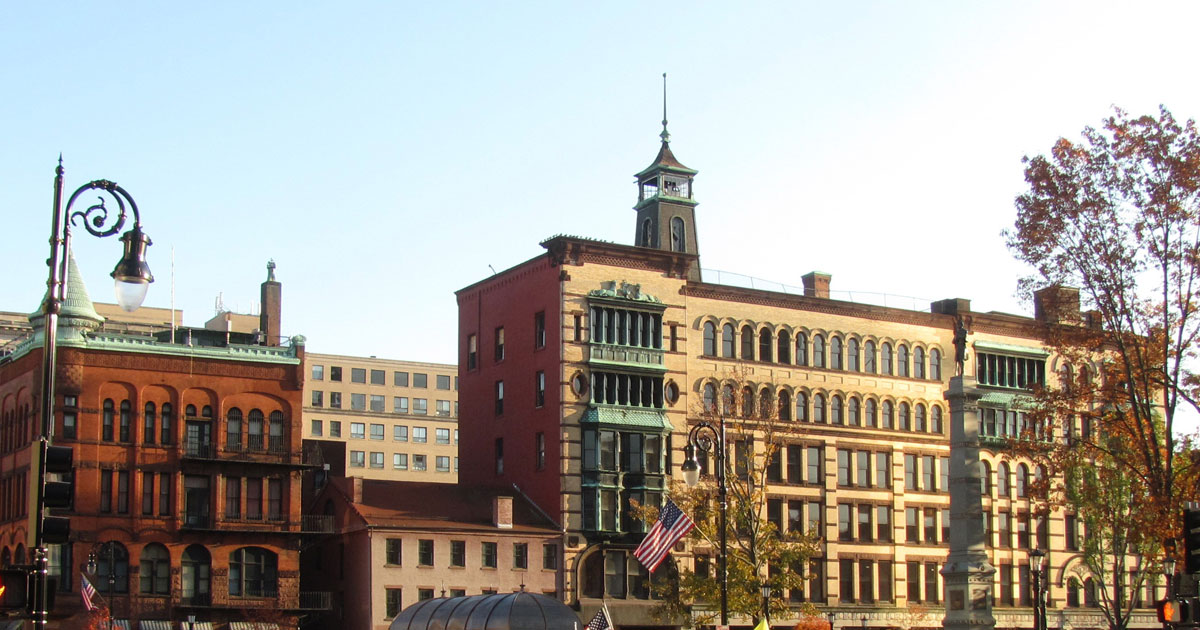 Springfield, MA is one of the oldest cities in the group of 10, first incorporated as a town in the 1641. It is conveniently located “midway between New York and Boston, and on the road between New York and Canada.” In the eighteenth century, Springfield became industrialized as the power of the nearby Connecticut River provided the opportunity for milling, manufacturing, and transportation development. In 1777, General George Washington established a national weapons arsenal in Springfield, spurring significant economic growth and attracting artisans, metal workers, inventors, and others to the area.

By the middle of the nineteenth century, Springfield was a manufacturing center and home to major companies such as the G&C Merriam Company (publishers of the nation’s first dictionary, Merriam-Webster), Milton Bradley, and Smith & Wesson. Like other Rust Belt cities, Springfield experienced economic decline as a result of technological advancements after World War II.  As the city has sought to reinvent itself in recent decades, it has turned to the education and health sectors, tourism and hospitality to boost the local economy. Springfield is one of eight cities across the state known as “Gateway Cities” that have historically been gateways to the middle class for generations of residents.

While the Springfield metro area was 90% White as recently as 1980, the population has witnessed a huge influx of Latinos, growing from less than 1% in 1980 to over 15% of the population as of 2010. In particular, the Puerto Rican population of Springfield, and Western Massachusetts more broadly, has been progressively expanding and a vibrant cultural community has taken root as more islanders seek greater economic opportunity. Massachusetts is home to some of the largest income disparities in the country, ranking in the top five states in earnings gap ratios between the highest 5% of earners and the lowest 20% of earners. In Springfield, income segregation and racial segregation are among the lowest for the 10 initial cities. Nevertheless, there are clear racial patterns in opportunity, with only 10% White unemployment compared to 20% Black unemployment.

In the 2016-17 school year, Springfield Public Schools managed nearly 60 schools, of which 34 offer instruction from pre-K through 8th grade, with the other 24 institutions serving middle and high school students. Approximately 26,000 youth comprise the student body, with Latino students accounting for nearly two-thirds of the student population at 65%, Black students about 20%, White students 12%. 17% of students are limited English proficient and over 40% of Springfield’s children are living below the poverty line, with 53% of Latino children experiencing poverty compared to 20% of White children. The numbers on youth mortality are particularly troubling, with rates among Black youth more than 2.5 times that of Whites (47.5 vs. 18.1) and 1.5 times among Latinos relative to Whites (27.5 vs. 18.1).

State of Healthy Living and Learning in Springfield

Springfield has 39% of the supports measured through the Index. In terms of learning environments, Springfield has one of the higher level of suspension (19%), which impacts Blacks students most significantly (25% of Black students suspended), but also affects White and Latino students to a lesser degree (15% and 19%, respectively). Springfield only earned one point in Capacity, because of having some of the lowest levels of access to rigorous curriculum, teacher salary and school resourcing. While only 2% of K-8 schools offer gifted coursework, 95% of students attend a school that offers at least one AP/IB class. Still, only 8% of High School students are enrolled in at least one AP/IB class, hindering Springfield’s children from achieving post-secondary academic success. Springfield has the lowest teacher salary of the group of 10 once cost of living is adjusted for ($29k) and only 75% of teachers have at least two years of experience. When we look at the broader community supports, we see relatively low levels of early childhood education participation (49% of 3- and 4-year olds in pre-school), high housing cost level burdens (62% of renters pay more than 30 percent of household income on housing), and 2-3 times higher levels of food deserts compared to all other cities studied (74%). While rates for these indicators are fairly similar across racial groups, Springfield doesn’t earn points for equity because rates across racial groups are far from the minimum benchmarks that define ideal levels for loving cities.