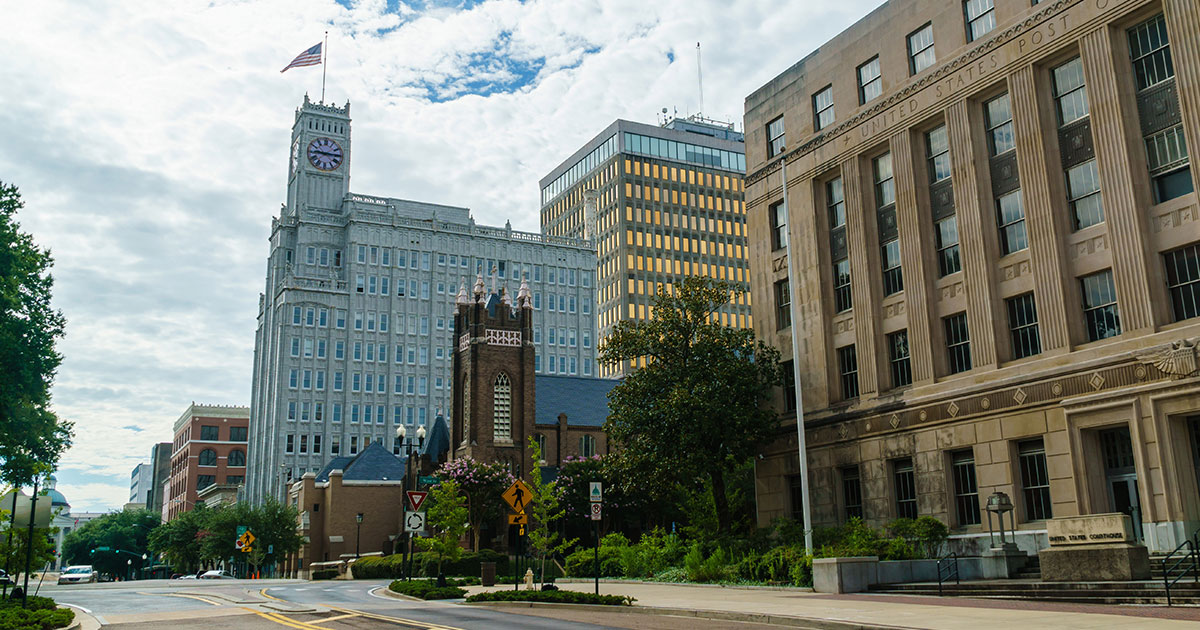 Located along the Pearl River in west-central Mississippi, Jackson, the “city with soul,” is the state capital and one of two seats in Hinds County. Jackson is home to 165,000 people and is the largest metropolitan area in the state. Jackson once served as a trading post along the Natchez Trace trade route. Today, the city’s economy still relies heavily on distribution and trade, along with manufacturing, construction, and healthcare. Historically, Jackson was originally home to the Choctaw Nation. In 1830 Andrew Jackson, for whom the city is named, authorized the Indian Removal Act, resulting in the forced relocation of many indigenous people to west of the Mississippi River. White racial terrorism continued into the era of American slavery and through the post-Reconstruction era of Jim Crow. According to the Equal Justice Initiative, Mississippi had the highest number of reported lynchings in the nation, and Jackson Public Schools resides in the county that had the highest number in the state.

Racist policies and practices shaped the segregated landscapes of today’s cities, including Jackson. During the 1930s, the Roosevelt administration created the Home Owners Loan Corporation (HOLC) to lend new mortgages and refinance home mortgages that were at default during the depression. By 1936 the agency had provided one million new mortgages and the agency owned one in five nationally. The agency developed lending risk maps in over 100 large cities, and map-makers relied on the prejudices of local loan officers, city officials, appraisers and realtors in appraising sections of the city, rating white areas of town as “desirable” and “best” for lending and areas of town where Black people, immigrants, and Jewish people lived as “hazardous,” thereby curtailing lending or issuing loans at much higher interest rates.

Many Black and immigrant families who could not obtain fair mortgages were forced into contract sales, which they paid sometimes double the actual worth of the home, could not build equity, and were more easily subject to eviction. HOLC maps in Jackson solidified segregation, and today that historic lending framework aligns with metro-wide inequalities in homeownership. (See Jackson’s HOLC map showing the “redlining” of neighborhoods throughout the city.) Housing discrimination continues to shape the city’s neighborhoods: a 2017 housing investigation in Jackson found that when Black and white potential homebuyers made inquiries about available housing, realtors did not call Black interested homebuyers back and actively steered whites away from integrated neighborhoods.

Early in Mississippi’s history, whites passed anti-literacy laws that prohibited Black people from reading and writing, punishable by death. Educational suppression coupled with later segregation influenced intergenerational opportunities. In 1896 the U.S. Supreme Court upheld racial segregation and for the next 60 years these Jim Crow laws legally defined schools, workplaces, buses, railroad cars, and even hospitals and cemeteries as either “white only” or “colored” (Plessy v. Ferguson). In 1954, segregation was challenged in Brown v. Board of Education, and the Supreme Court held that the “separate but equal” doctrine violated the 14th Amendment. In a unanimous decision, Chief Justice, Earl Warren wrote, “In the field of public education, the doctrine of ‘separate but equal’ has no place. Separate educational facilities are inherently unequal.” Subsequently, school desegregation plans were initiated in many cities, both in the South as well as in the North, where schools were often racially segregated though without the formal laws of the South.

After the Brown decision, white officials in Jackson immediately passed laws that reaffirmed segregated schools and granted the governor the power to close schools in order to defy desegregation orders. The all-white Mississippi legislature managed to delay desegregation for almost 10 years by arguing that residents had the “freedom of choice” to integrate (messaging that has continued to be used today to promote school choice programs that have been shown to maintain segregation and inequitable resourcing). Finally, in 1969 the U.S. Supreme Court ordered Jackson schools to integrate, kicking off an out-migration of whites: 9,000 white students immediately left the district, some to attend private academies, abetted by a voucher-like tuition law that allowed public funds to be used for private school tuition. By 1973, he White Citizens’ Council, a white supremacist group, operated five privately run, publicly funded schools serving 5,000 students by 1973. By 1970, 61% of students in the public school district were Black, and by 1994, 85% of students were Black; today 97%, nearly all students in the district, are Black. Segregated schools continue today: Black and Latino students are concentrated in many of the district’s schools, while a small number of others are majority white. In 2016, a U.S. district judge ruled Jackson needed to do more to integrate two high schools. The U.S. Justice Department is still party to dozens of desegregation suits in Mississippi and 61 of the state’s districts are under desegregation orders.

State of Healthy Living and Learning in Jackson

Overall, Jackson has large gaps in access to resources and supports across each of the domains of Loving Cities. Compared to other cities studied, Jackson had the lowest percentage of healthy food access for low-income residents (only 28%), the lowest access to public parks (only 31%), and high exposure to air toxins, especially where communities of color live. One health equity bright spot was that nearly all children do have access to health insurance. However, there are high rates of infant and youth mortality for Black children and considerably higher rates of Black infants born at a low birth weight compared to white infants.

When it comes to neighborhood living environments, Jackson has major inequity in wages, similar gaps in housing affordability, no access to high-frequency public transportation, and one of the lowest levels of access to financial services (checking and credit services) of cities studied. 100% of Jackson Public School students live in poverty, so none of the schools are economically integrated. This points to the need for state-wide intervention to ensure inter-district policy that supports greater racial and economic integration in schools in the greater Jackson area.

When Chokwe Lumumba won a historical election for the Mayor of Jackson in 2013, he started the work of bringing a comprehensive agenda for human rights and self-determination for Black people that aligns with the Loving Cities framework, and increased community participation in the political process, co-creating the People’s Platform. As his son and current Mayor Chokwe Antar Lumumba continues this legacy, including initiatives for local economic development initiatives that can address indicators in economic stability, and by extension education outcomes, there is hope for transformational change in Jackson grounded in social justice.